Trying to Be White: A Social Epidemic

“The skin lightening business garners a monstrous TEN billion dollars a year by exploiting not only personal insecurities but also the global after effects of colonialism and white supremacy.”

“With her curly black hair surrounding her dark face, she looks like a witch.”

That was something a loved one said to my father when I was five years old.

He was furious, but just because my parents supported me doesn’t mean other people would. Ironically, I’m not dark at all by global standards, medium skinned at most, but to some that was unacceptable. I failed to be born with the pale white skin tone many of my female cousins had, and I grew up comparing myself to them. Feeling ugly, worthless, and at some points in my life, dirty.

READ: White Skin is The Wrong Skin: How to Pick the Right Foundation Shade

But this self-hatred was completely internalized; I never let my family know what I thought of myself. On the outside, I would verbally tear anyone down who tried to value others by their skin color, but on the inside, my self-image was completely broken. I was lucky enough that I never succumbed to the temptation of skin lightening. No matter how uneasy I felt about myself, I knew that was not the path to be taken.

Chronic use of these lightening soaps and creams inevitably will lead to adverse physical/psychological effects. Many companies that sell these products resort to using the inorganic form of mercury, which is banned in the US, Europe and most of Africa.

Unfortunately, that is not the reality for millions across the world. Many women, young girls, and men fall prey to the skin lightening industry each year. Many companies not only dish out simple creams, but they also offer a broad range of products that promise to lighten even underarms and genitals.

The skin lightening business garners a monstrous TEN billion dollars a year by exploiting not only personal insecurities but also the global after effects of colonialism and white supremacy.

Probably the most iconic image from Fair and Lovely’s marketing campaigns. Unhappy and dark to light and smiling in just a few short weeks. Image courtesy of Only the Lonely

According to the World Health Organization(WHO), about 40% women from China, Malaysia, the Philippines and the Republic of Korea who were surveyed reported using skin lightening products. Women in the following African countries also reported using these beauty products: Mali (25%), Nigeria (77%), Senegal (27%), South Africa (35%) and Togo (59%).

Approximately 61% of skin care products in India are to lighten the skin, and many other countries alike are producing mercury based products for such large consumer markets. Some of these countries include China, Dominican Republic, Lebanon, Pakistan, the Philippines, Thailand and even the United States.

These statistics just go to show that skin whitening is not an isolated problem, but a virtually universal one.

Chronic use of these lightening soaps and creams inevitably will lead to adverse physical/psychological effects. Many companies that sell these products resort to using the inorganic form of mercury, which is banned in the US, Europe and most of Africa.

Mercury inhibits the production of melanin which results in a lighter skin tone but can lead to devastating consequences. Persistent use can result in skin rashes, discoloration, photosensitivity, and weakening of the skin’s defense against bacterial and fungal infection. More severe cases can make you prone to multiple types of skin cancers because melanin is a form of defense against the sun’s harsh rays; or perhaps the most documented serious side effect- kidney damage.

Other problems maybe anxiety, depression, psychosis and possibly peripheral neuropathy. Now, these damaging outcomes only pertain to the individual, but what about the environment? Surely, washing your face and body every day with mercury-containing products cannot be good for the environment.

The release of mercury into the water supply on a large enough scale can lead to methyl groups attaching to the mercury, a process otherwise known as methylation. Fish swimming in this water can become hazardous to those consuming them, especially pregnant women. If tainted fish is eaten by a pregnant woman, the mercury can transfer to the fetus, possibly causing neurodevelopmental problems. 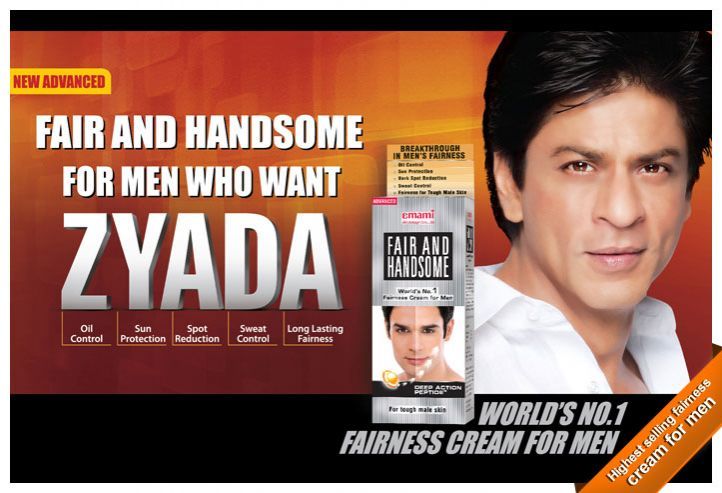 Fair and Handsome being promoted by a huge Bollywood star can only mean that it will impact many more viewers.

Although men, women, and children are all prone to the detrimental effects of colorism, young women tend to be the biggest victims on a global scale. From an early age, they are taunted, traumatized and ostracized if their skin tone is not up to par with that particular societies’ standards.

Light skin is constantly equated to success– success in academia, success in love and success in society; while dark skin is deemed undesirable, unlucky, and incapable of achieving social success.

Watch this Fairy and Lovely Ad that equates fairness to success. If you have a darker skin tone, regardless of your traits and talents, you will miss out, according to South Asian standards.

These ideas are reinforced through media, with commercials for products like “Fair and Lovely,” reiterating the idea that only light skinned women can achieve happiness in life. Many times in their ads, medium toned or at most tan skinned women reach the height of success after lightening their skin. Oddly enough there are never any darker skinned women in their ads. You know, the ones that are the biggest consumers of these products. These women are so invisible in society that they fail to get representation in media that is aimed at them.

In many cultures, dark skinned women are deemed “unmarriageable,” and for some girls, there is no other path in life; they are stuck. For others who have excelled in their education, their skin tone becomes a problem for job prospects.The glorification of white skin from their families, friends, and society becomes an obstacle in their lives.

This same colorism is what feeds hierarchical social structures such as caste systems, apartheids, and rigid financial/class structures. The many years of oppression under colonial rule has changed from hatred for the outsider to hatred of ourselves.

People were taught that their skin color, their culture, their traditions were all barbaric, second class to the porcelain white color that embodies power and purity. In turn, many communities have internalized this racism and now churn it out to younger generations.

Just because the colonial era has ended does not mean the legacy has died.

The same countries that ban the use of mercury in beauty products, export mercury to companies overseas. Unilever, which is the parent company of Dove, loves to promote the idea of self-love and #realbeauty in America, but is actively destroying lives in greater Asia with “Fair and Lovely.”

Why are chemicals that are unfit for European/ American bodies okay for bodies that belong to communities of color?

Skin lightening is a problem which is rampant all over the world, and this practice affects not only individuals but societies and environments as a whole.The longer we continue to ignore this problem, the larger the business becomes; and the grip of colorism tightens even more.

If we hope to live in a future of equality, then it is our responsibility to eradicate these socially constructed ideas of beauty and success. We cannot let corporate companies profit off of personal misery any longer.

If you enjoyed this article and think your friends would find it inspiring, we would love for you to share it on your social media platforms!

The Bandwagon Effect: Why You Don't Control Your Life

Life Swings Between Pain and Boredom: Are We Never Happy?